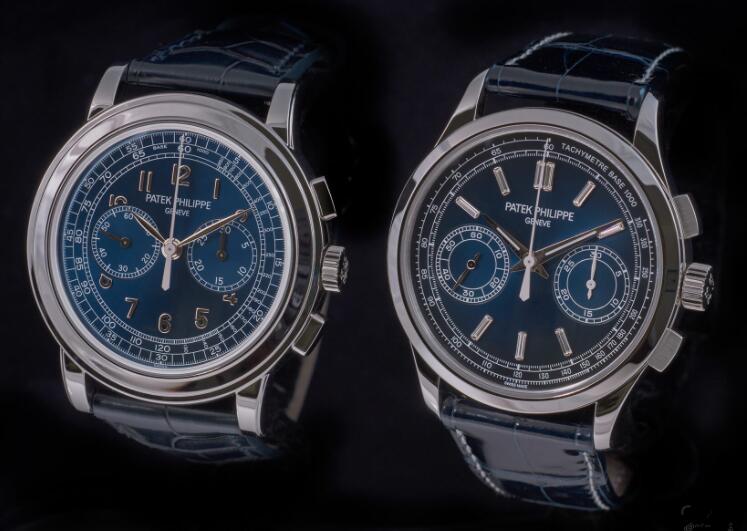 From the time that I first made it known that I’d brought home Patek Philippe’s lovely Reference 5170P chronograph, I’ve frequently been asked two questions:

How does it stand up to my perfect fake Patek Philippe Reference 5370P split-seconds chronograph? I addressed that topic briefly in my “Why I Bought It” article on the 5170P, but may return with another report fafter I have the benefit of more wrist time with both.

How does it compare to Patek Philippe’s prior flagship chronograph, the platinum-cased Reference 5070P?

I don’t own a Reference 5070P (nor for that matter any of the 5070 variants). But happily enough two members of our NorCal watch gang do, and one of the two watches is the super-rare Reference 5070-013 “London” edition issued in May of 2015 for the firm’s exhibition at London’s Saatchi Gallery (see Eleven Regal Timepieces From Patek Philippe’s Grand Exhibition At London’s Saatchi Gallery).

Recently, the 5070-013 London edition came my way for some shooting, and between that and some older shots of my other pal’s original Reference 5070P-001 I can share a direct comparison with you.

It was seven or eight years ago that I first saw a Reference 5070P in the metal at one of our gang’s regular luncheons that happened to have a “chronograph” theme.

I was immediately captivated by the masculine proportions of the watch, the attractively cluttered dial with its white gold applied numerals, and the profile of the 507x-style case (which also serves exceptionally well in the much more complicated guise of the Reference 5074 perpetual calendar minute repeater featured in The Great Chime-Off: best replica Patek Philippe Minute Repeater References 5074P And 5078P.

In 2012 I managed to borrow this 5070P-001 for a photo session using my 2012 equipment and 2012 photographic skills; I recently went back through my photo files and above and below are a couple of shots that at a minimum do a decent job of imparting a sense of the gravity of the watch and the captivating slate-blue color of the dial.

As I’ve had the opportunity to compare and contrast Reference 5070 and Reference 5170, one thing that has struck me is how cleverly Patek Philippe managed to package the Lémania-derived Caliber CH 27-70 movement with its 27.5 mm diameter into a wristwatch that, at 42 mm in overall diameter, is one of Patek Philippe’s largest ever.

If you look carefully, you’ll notice that the subdials for the 30-minute chronograph counter and running seconds are actually quite close to the center of the dial.

Watches with a “cross-eyed” appearance revealing a too-small movement inside are a pet peeve of mine, but Patek Philippe’s use of a double outer railroad track for the chronograph seconds and tachymeter fills the space so well that until now I’d never noticed the inboard subdial placements.

After I’d first had a chance to check out Reference 5070P in detail, it took up a prominent position on my “objects of desire” list; but I wasn’t alone in my longing, and the prices for the few pre-owned pieces that came to market began high and then got higher. So I never pulled the trigger.

Fast forward to Baselworld 2017 and I had my socks knocked off again, this time by the newly introduced Reference 5170P with its striking blue-black dégradé dial and sparkly-but-distinguished applied diamond baguette-cut hour markers.

I’ve written in detail here previously about the 5170P so won’t go on at great length now, but I’ll foreshadow my conclusions below by saying that for me Reference 5170P is in every way a worthy successor to its platinum forebear.

In July of 2017, I had the opportunity to meet up with watch friends from around the world at the Patek Philippe Grand Exhibition in New York. One of the great treats of that visit was the opportunity to see a pal’s newly acquired Reference 5070P-013 London edition.

Our group of collectors had the opportunity to compare this watch with an example of the original 5070P, and a debate immediately broke out: was the dial of the “London” watch lighter or darker than the original version?

The lighting at any particular moment played a role in one’s perceptions, but at the same time it seemed that overall views differed from person to person.

To my eye, at least, the color of the limited-edition watch is a truer blue than Reference 5070P-001’s blue-grey, and the tone is somewhat lighter. But as you can see in the photo below, depending on the angle and conditions the perceived “lightness” of the dial can change quite a bit.

If you compare the dials of the two watches, you’ll also be able to pick out some other subtle differences, including:

One area in which the two watches are identical is the movement side, with a striking view of the Caliber CH 27-70 movement presented by Patek Philippe in 1986 and first incorporated in its yellow gold Reference 5070J in 1988.

As on the front of the watch, Swiss made fake Patek Philippe had to do some work to make the 27 mm diameter movement work visually in a 42 mm watch; at the rear the stepped bezel and angled outer edge of the screw-on case back guide the eye in to a movement that in turn is not deeply sunk into its case, helping to alleviate the impression of a smallish movement size.

On to the main event! When you get the 5070 and 5170 side by side, both the clear differences and underlying family resemblance are apparent.

Interestingly, to my eye at least, the two watches appear to be quite similar in size, even though the 5070 is almost 3 mm larger in diameter, as the more open dial and thinner bezel of the 5170 trick the eye. The simpler Calatrava-style case of the 5170 works well with the open, modern look of the watch – although I find the 507x case with its stepped bezel and lugs hard to beat.

A quick flip and we’re on to the movement sides. I’m a fan of the earlier Caliber CH 27-70 and its Geneva Seal, but when push comes to shove the size, openness, and visual pop of the in-house Caliber CH 29-535 PS really speak to me, and I love details like its black-polished column wheel cap. I’m also convinced by its functional advancements that include hacking seconds and instantaneously jumping chronograph minutes.

Each movement seems completely coherent with the rest of its respective watch: the 27-70 is more old school meets steampunk to my eye, while the 29-535 is very much twenty-first century design.

On the tactile front, both have a fairly light but natural manual winding feel. When it comes to the pushers, the 5170 to me has a more pleasing progressive feel to the start/stop pusher than the 5070, while the 5070 exhibits a more balanced level of effort required to actuate the start/stop vs. return pusher than the 5170, whose return to zero feel is quite light.

Let’s face it: life could be worse than having the chance to strap on these wonderful watches! After finishing up in the light tent I could hardly wait to get Reference 5070P-013 on my wrist for a quick bit of shooting outdoors.

Next up was Reference 5170P, and in natural light the blue-black color has to be seen to be believed.

And thanks to the miracle of an 8 TB backup drive and a just-good-enough filing system, I was able to dig out one of my earlier photos of Reference 5070-001 for comparison purposes.

I’ll confess that when I began this comparison I fully expected that at the end of the day I’d have a strong preference for Reference 5070P, a watch that I’ve lusted after for the better part of a decade now, over my own Reference 5170P.

It came as a bit of a surprise that once I’d handled, shot, and scrutinized both I found the race pretty much a dead heat. Maybe if somewhere in the Patek Philippe vaults in Geneva there were a Reference 5070P with the more modern fonts and printing proportions of the “London” edition and the blue-grey color of the original Reference 5070 I’d be tempted to sell off a number of watches and get down on bended knee to ask for it. But that seems somewhat unlikely.

For now, I’ll be more than happy to wear my new-age Reference 5170P and borrow my pals’ pieces from time to time!