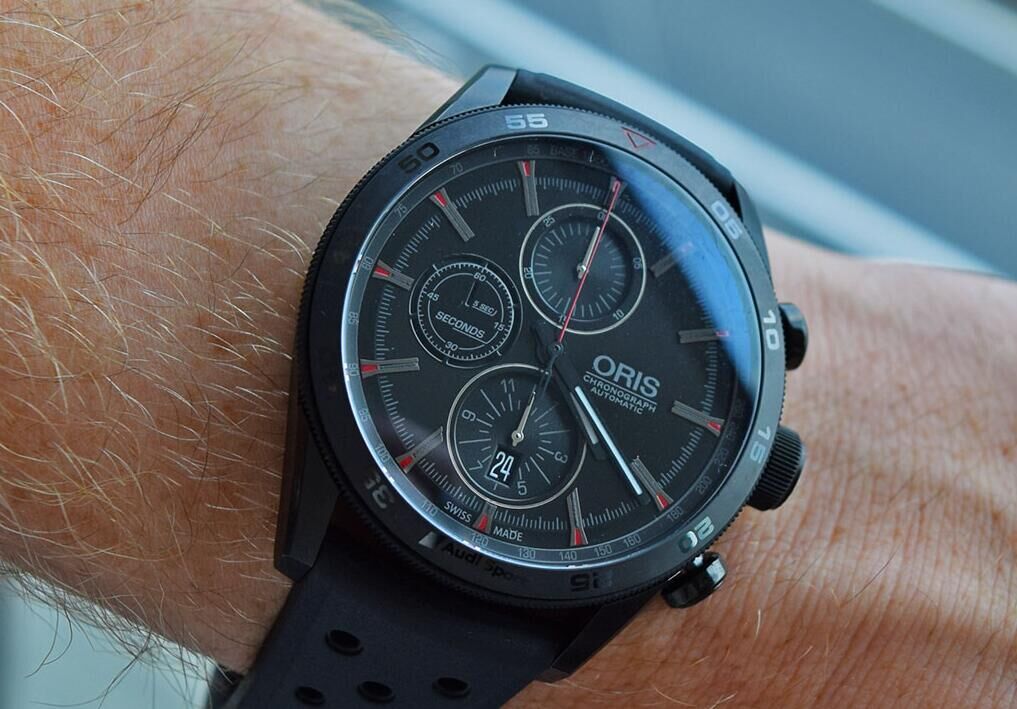 For returning readers it is a known fact most members of team Monochrome are car-guys to some extent. Obviously, both watchmaking and the automotive industry are intertwined extensively, so when Oris gave us the chance to attend the FIA World Endurance Championship 6 Hours of Nürburgring race, I jumped on the occasion! 6 hours of the fastest prototypes and road-car-based racers on the planet, blasting around an historical track sounds like a good way to spend a weekend! Oh, and there was a new watch. Quite a cool, special watch, to be handed to the drivers of Audi Sport: the cheap replica Oris Audi Sport III Limited Edition.

Most people might know the brand to be focused on dive watches but that doesn’t do them justice, as they are capable of so much more! They have brought us the world’s first automatic altimeter for the wrist, or a watch with in-house movement featuring a single barrel storing up to 100 hours of power, neither of these are in the diving collection. And to top that, Oris has had a strong connection with motorsports for quite a few years now, as a partner for Williams F1 Racing and more recently with Audi Sport. As you might have guessed by the full name of the new watch, it is the third edition of the collaboration between Audi and Oris (A reminder of the previous watch if needed). Both of these collaborations are on the highest level of motor-racing, Formula 1 and LMP1 Endurance Racing (Although they also support GT-class racing through Audi Sport).

A typical racing weekend in the FIA WEC class features a number of training runs on Friday and Saturday, qualifying on Saturday and of course a race on Sunday. The only exception being the Le Mans 24-hour race, which starts on a Saturday and runs for a full 24 hours. To be honest, qualifying is a bit of a formality since a LOT can happen in 6 hours of racing and even more in 24 hours. It is also entertaining to see that none of the competitors take it easy, in order to just endure the 6 hours. It is a full-on race, almost as if it lasts only 6 laps and there is a BIG prize to be collected at the finish (of course there is, but you get the idea right?). Swapping places left and right, the occasional light touching through turns as a Porsche wiggles its way past the Audi or the other way around, a fair number of pit stops and, a crash here and there and eventually the entire race comes down to less than a minute! After 6 hours, 194 laps and 1000km of racing the gap is less than 60 seconds! Sadly for Audi, they lost out to Porsche but achieved a P2 and P3 in the final results. The event is heavily watch-related too, as mentioned before. You can find various brands all over the track, or as a sponsor or timing partner for any of the teams. One of them, obviously, being Oris which presented the all-new luxury fake Oris Audi Sport III Limited Edition to the drivers and team principal. And yes, we were lucky enough to be there and get up close with the racing, the drivers and of course the watch. 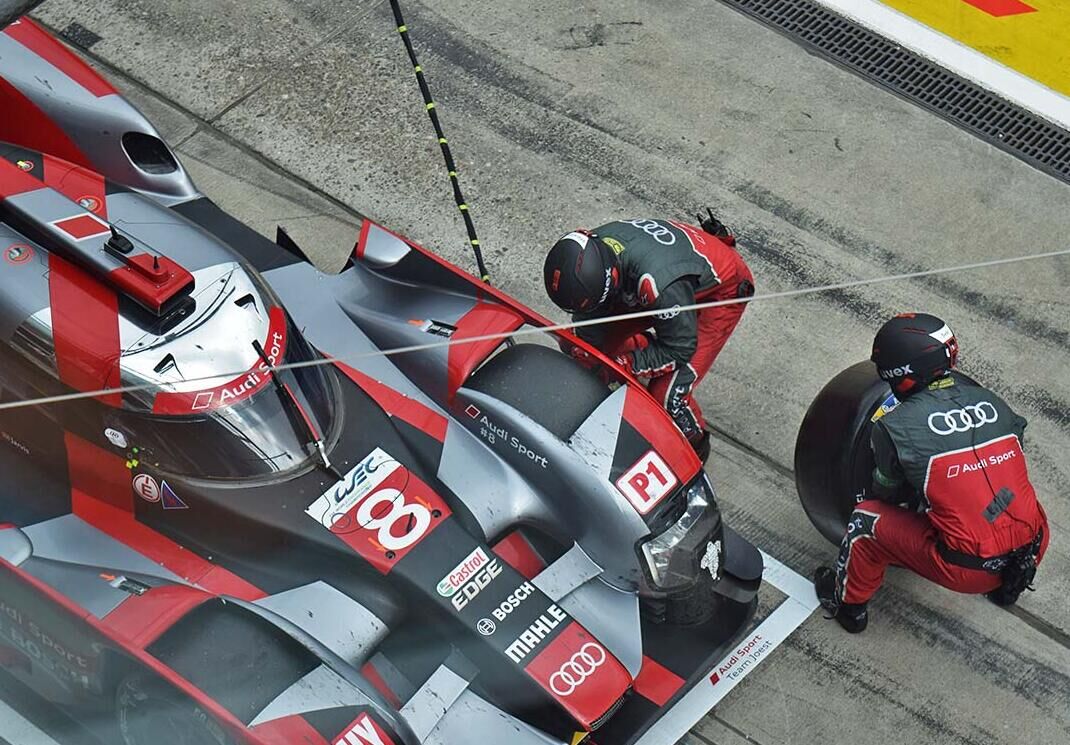 The new Oris Audi Sport III Limited Edition is the third rendition of the partnership between the Ingolstadt based car manufacturer and the Swiss watch brand. The first edition was introduced in 2014 and featured a 44mm wide steel case with a GMT function and tachymeter scale on the bezel. The second edition, see the link earlier in this article, was introduced last year and had a 44mm wide DLC-coated titanium case with a Sellita SW500 based chronograph movement. The most noticeable feature of this second edition was the linear indication of the small seconds indication at 9 o’clock.

The Oris Audi Sport III L.E. is again housed in a 44mm wide DLC-coated titanium case. Oris is known for its strong, crisp cases and this Audi Sport III L.E. is no exception. We have experienced this time and time again, whether we tried the exact replica Oris Aquis Date, Big Crown ProPilot or the Divers Sixty-Five, they always felt really good. The large case hugs the wrist well due to the nice curve of the lugs, something that is essential on every watch but trickier to get right then you might think. The weight of the watch also helps, as it is quite light, since it is made of titanium. The chronograph pushers and screw-down crown feel equally well built, and handle very nicely. Don’t be shy to use a bit more force as you might expect as both the start-stop pusher and the reset pusher need to be firmly pressed (common to all Valjoux-based watches). 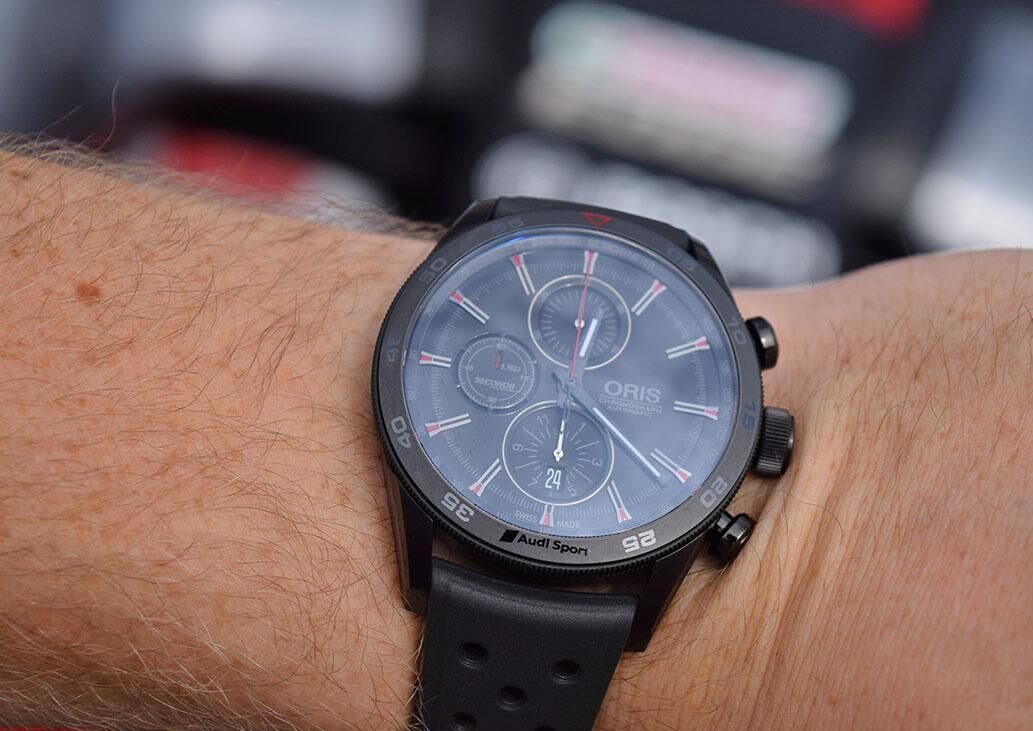 The dial is quite busy and dark, but luckily still legible. The busy part is mainly due to the many markings and details, but since everything is either black, red or white it still keeps a somewhat restrained look. Sounds like a bit of a contradiction but in some combinations, it just works and this is a clear example if you ask me. The black dial has large, applied hour markers with red touches on each of them, and white markings all around for the minute and seconds tracks of both dial and subdials. 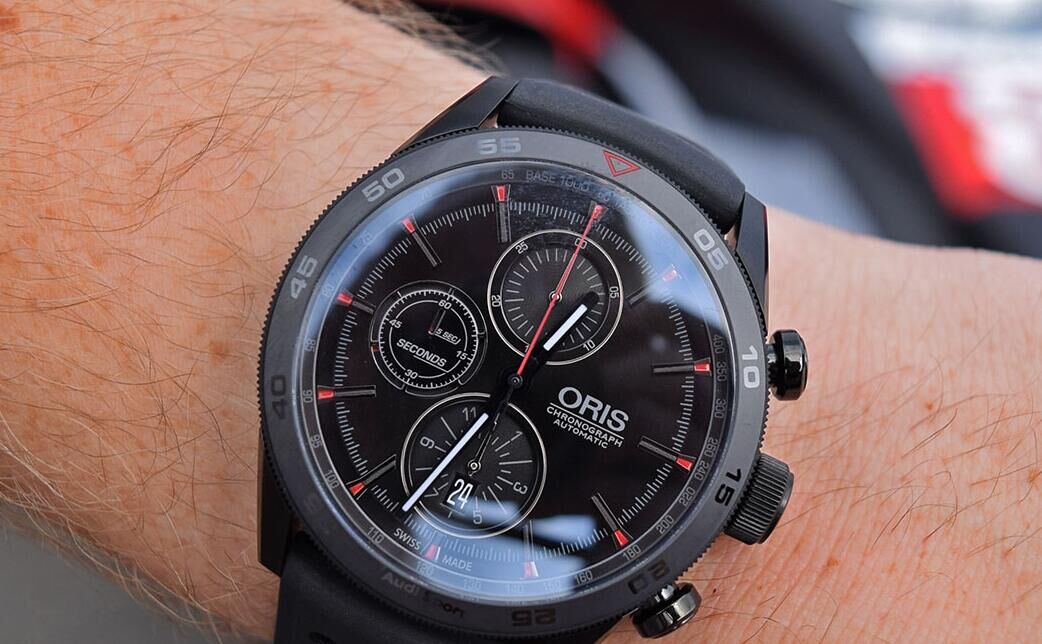 The subdial at 12 is the 30-minute counter and the one at 6 is the 12-hour counter. Most chronographs aren’t scaled to measure that long but if you consider this is built with endurance racing in mind, it makes perfect sense. At 9 o’clock you can see the special small seconds, which doubles as a countdown-to-start indication. Instead of a hand, the subdial has cut-out spaces surrounding the edge of the scale, with a rotating black disk and red tip underneath that displays the continuous seconds. An additional cut-out at the top of the subdial, showing the 5 seconds to start or the build up to “lights-out, go-go-go” if you will. The cut-out “bar” fills up in five seconds and then the red disappears as if the starting lights turn off and everyone is released to power down towards the first corner. And of course, at an event where you race for multiple hours and the start is always at a full hour, it helps to time the start of the chronograph as close to perfection as possible, or are we stretching it a bit here? 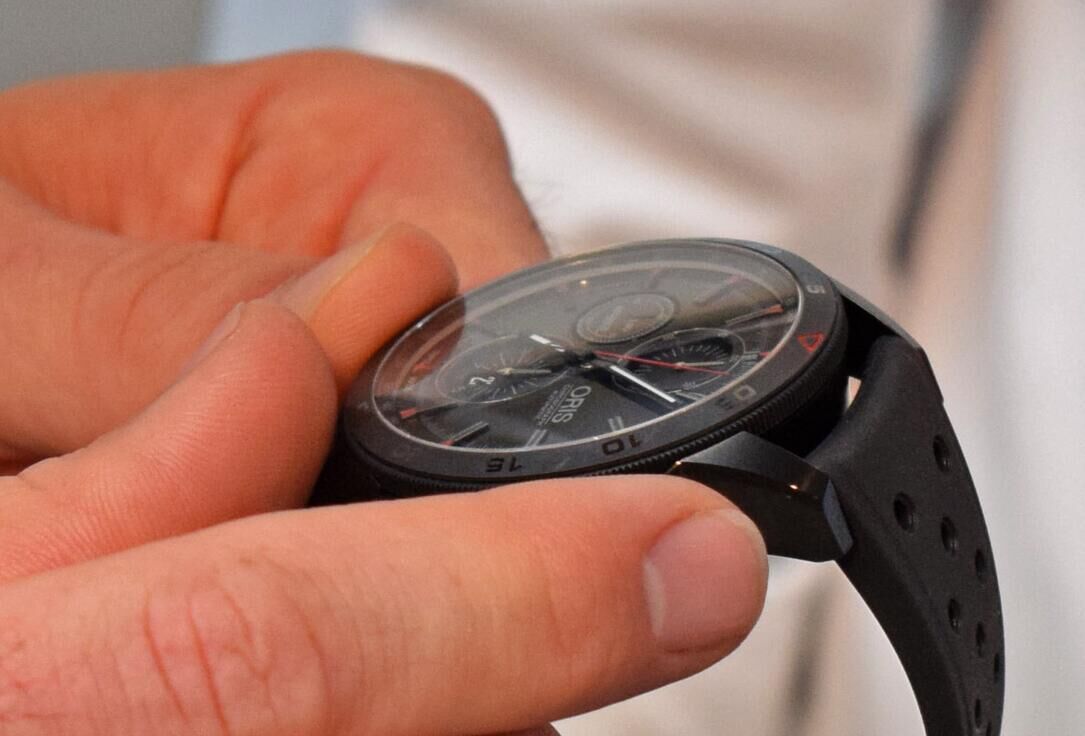 To balance out the dial a bit, the Oris brand name and “Chronograph Automatic” marking is placed at 9 and a relatively large date window can be seen inside the 12 hour counter. On the outside edge of the dial you can find the tachymeter scale, another indication this is a watch built with speed in mind. The bezel of the luxury replica Oris Audi Sport III L.E. has a ceramic insert, with a minute scale and a red triangle at the top. This bezel is bi-directional, to help you keep track of certain eventualities during the race if needed. The sapphire crystal has a slight dome, and received an anti-reflective coating to reduce reflections in direct sunlight. 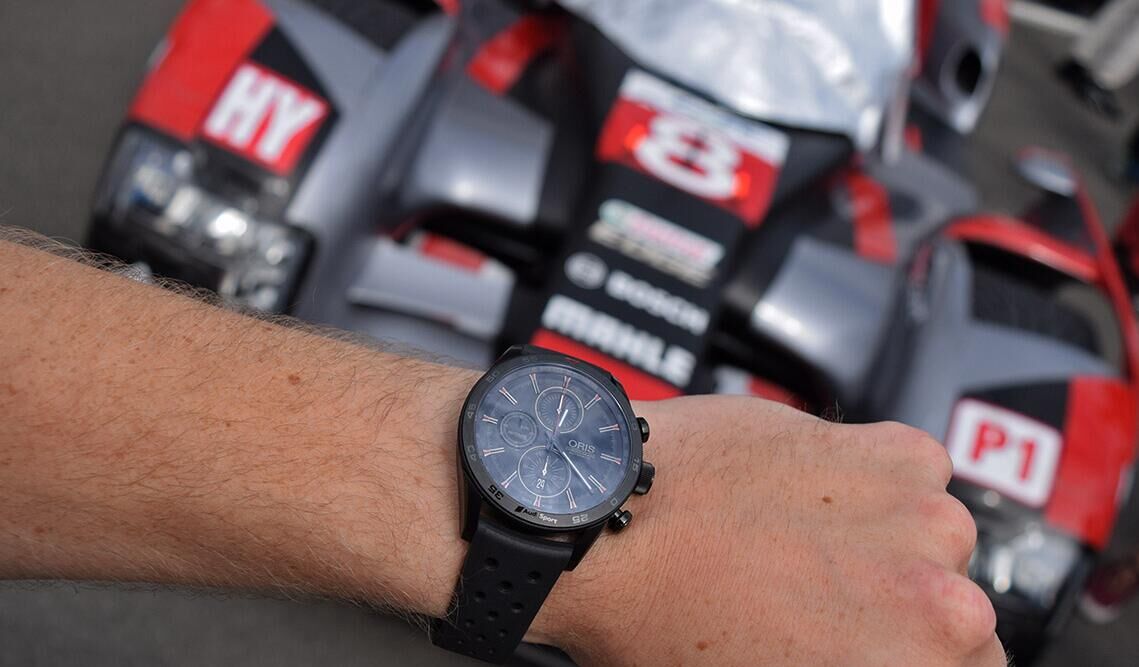 The movement of the Oris Audi Sport III L.E. is the same as the previous version, a Sellita SW500 based chronograph movement dubbed the Oris 774 caliber. This Sellita SW500 movement is basically a Valjoux 7750 clone, and gives you the famous Valjoux-wobble when wearing. For those unaware of what this is, the Valjoux-wobble is the feeling of the heavy rotor spinning at high speed. This is due to the weighted rotor experiencing very little resistance, and when you “hit” a certain frequency or angle when moving you can feel your watch moving on the wrist as the rotor spins around. It sort of connects you to the watch, let’s you know it is a) still there and b) working hard to keep running and provide you the time when needed. 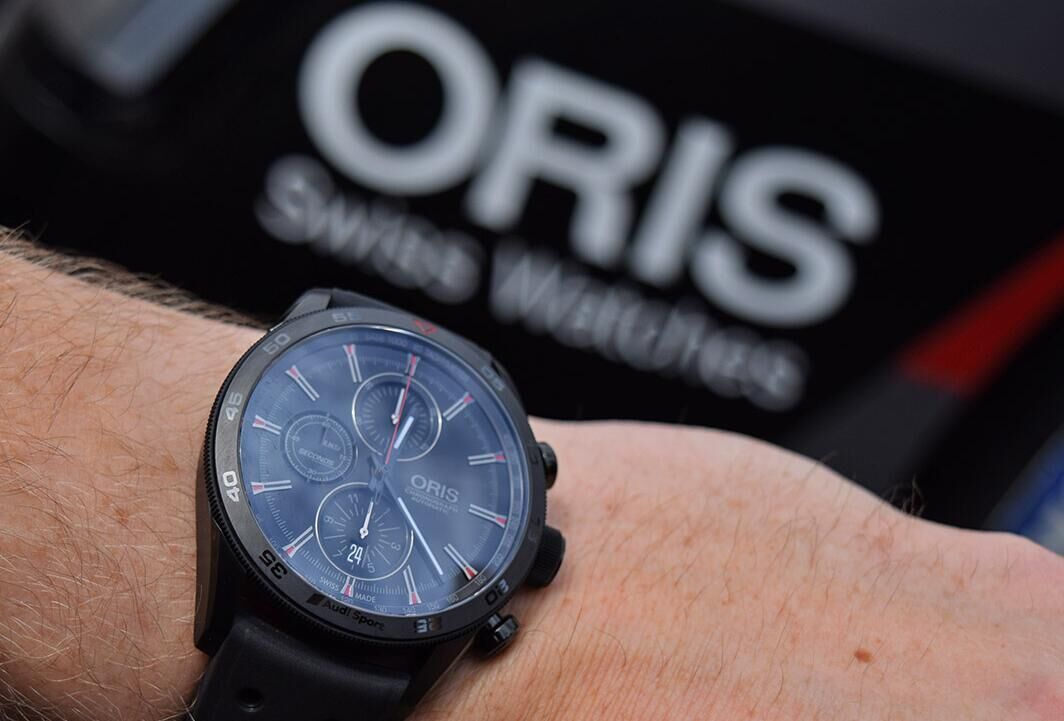 Coming to an end, the luxury replica Oris Audi Sport III L.E. is a sportswatch, of that there is little doubt. (The biggest clue is perhaps the name). It is attached on a perforated black rubber strap with a black DLC plated titanium folding clasp. Production stops at 500 pieces, the watch will come in a special presentation box, and it will set you back 3,750 Euros.

If you consider all of the attributes of the Oris Audi Sport III Limited Edition, it sits at the top-end of the Oris-range in terms of price (not including any precious material cased watches of course) but it still offers you a very strong watch. A chronograph movement, titanium case, ceramic inlay in the bezel, or DLC coating below 5k are not unheard of but combined into one watch it is not that common at all.